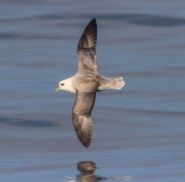 Nestling in the Irish Sea, the Isle of Man boasts a beautiful and varied coastline.

Soaring southern cliffs rise hundreds of feet from the sea. Twisted by powerful tectonic forces, their sedimentary layers have been eroded at different rates by wind, sea and rain, creating ideal ledges for auks and kittiwakes.

The low northern sandstone cliffs gently give way to long beaches of shingle and sand. Here, winter flocks of waders rest and feed. In summer, scattered colonies of Little and Artic Terns nest.

Historically, the coast brimmed with seabirds. Kenneth Williamson noted that the Calf of Man once held probably the world's largest known colony of the eponymous Manx Shearwater – an estimated half a million burrows. Pat Cullen wrote that Great Auks probably were summer visitors and how Razorbill and Common Guillemot remains can be found in deposits dating back to AD90.

The last Isle of Man seabird census took place in 1999. The only other detailed count was made during 1985-86. Hence, we set about the first census of the island's seabirds for nearly twenty years.

Seventeen species were surveyed from April to June 2017 using JNCC's Seabird Monitoring Partnership protocols. Broadly speaking, this prescribes that for some species it is the number of nests that are counted, while for others it is the population of individual birds that is used as the measure. The counting method that is applied to each species depends on that species particular nesting behaviour. Using the common standards of the protocols ensures comparability of our data with that collected across the British Isles.

In 1999, no proof of nesting Shearwaters was found. But thanks to concerted efforts since 2000 to eradicate rats from the Calf of Man, up to 400 occupied burrows were estimated in 2017.

The relict population of half-a-dozen pairs of Puffin recorded in 2017 is a fraction of the already diminished population of 100 individuals estimated in 1999. Work is now underway to attract Puffins back to the rodent-free Calf of Man.

While the number of Cormorant nests and the population of Common Guillemots have both increased, the subtly different needs of Shag (-51% nests) and Razorbill (-55% individuals) have caused them to respond differently to environmental changes over the last twenty years.

The population of that icon of rugged northern and western British coasts, the Black Guillemot, has apparently declined by two-thirds since 1999.

One stark change has been the loss of whole colonies, leaving a greater proportion of seabirds in fewer locations. This contraction makes the population more vulnerable to stochastic events such as storms and pollution as well as disturbance.

Manx BirdLife will work with the island's government and conservation partners to determine how we might reverse the fortunes of our seabirds. Although diminished, the sight and sound of seabirds remains an intrinsic feature of the celebrated Manx coastline. We aim to keep it that way.

Manx BirdLife wishes to thank the Department of Environment, Food and Agriculture (DEFA), Walney Extension Offshore Wind Farm Project, Isle of Man Steam Packet Company and the many local businesses and individuals who made the 2017-18 census possible.