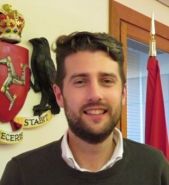 A member of the UNESCO Biosphere Isle of Man youth forum has been chosen to represent Biospheres in the UK and Ireland at an international gathering.

Leo Wasley, 29, will attend the second UNESCO Man and the Biosphere Programme Youth Forum in China from 15th to 18th September.

With the theme 'Committed to Biodiversity', the forum will offer young people from Biospheres globally the chance to contribute to the 15th Conference of parties to the Convention on Biological Diversity (CBD), which will be hosted by China in 2020.

That event is expected to adopt a new global framework for biodiversity and ecosystems, ensuring that solutions to challenges benefit human wellbeing, the economy and the planet.

Giving young people a voice globally on issues that matter is a priority for UNESCO MAB.

Leo, a chartered accountant with PwC Isle of Man, has been involved in the Island’s youth forum since it started in 2017. A speaker of French, Spanish and Russian, he has held international roles, including as a UN translator.

He said: ‘A lot happens in our Biosphere that I am eager to share with youth representatives from across the globe. I am also keen to learn about the role young people play in other Biospheres, so I can share their experiences with young people in the Isle of Man, UK and Ireland.

‘I am especially keen to find examples of work being done to encourage young people to choose to live in Biospheres and lead happy, prosperous and sustainable lives there.’

The Youth Forum takes place in Changbaishan Biosphere, in north east China, on the border with North Korea. The area boasts 16 mountains and beautiful lakes formed of volcanic craters. 65,000 people live in the Biosphere and it attracts 170,000 tourists a year.

More than 150 young people from 86 countries will attend.

The Forum builds on the success of the inaugural event, held in Italy in 2017, which was attended by 84 countries, including the Isle of Man.

UK and Ireland Biospheres will also be represented by Heather Fulton, 26, from Wester Ross Biosphere in Scotland, who is studying arts at university in Edinburgh.

Follow our UNESCO Biosphere Isle of Man and UNESCO UK social media feeds for updates on the event from Leo.