If you go down to South Barrule Forest today, you are sure of a BIG surprise.

If you go down to South Barrule Forest today, you are sure of a BIG surprise.

A sculpture of Manx folklore legend The Buggane has been unveiled and is a commanding presence in the forest, which is popular with leisure users.

The Buggane is a figure of Manx legend: a huge, menacing ogre with piercing eyes, terrifying tusks and sharp claws. Folklore says he kept himself to himself, living wild, unless provoked, but tore down buildings and terrorised villages if people displeased him.

Thankfully, the modern-day version, gifted to the Department of Environment, Food and Agriculture by its creator, Tom Cringle, is a more benign creature, in keeping with the family-friendly nature of the forest and all its activities. 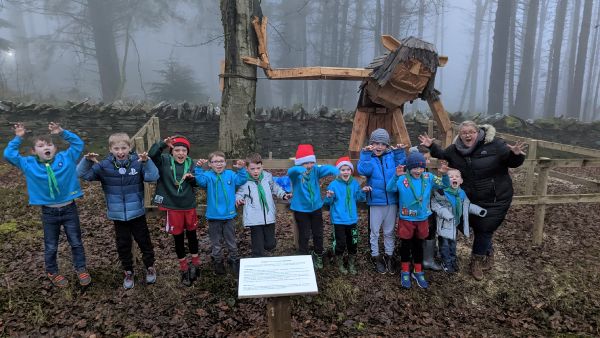 Tom has a great affinity for the outdoors in the Isle of Man and is a fell runner. His work connects culture, folklore, heritage and nature and he uses reclaimed and recycled wood in his work.

The installation reflects two of UNESCO Biosphere Isle of Man aims, connecting people with their heritage and culture and visibly celebrating our unique sense of place.

The sculpture was unveiled as darkness fell on a suitably moody winter afternoon, with mist swirling around even around at low level. 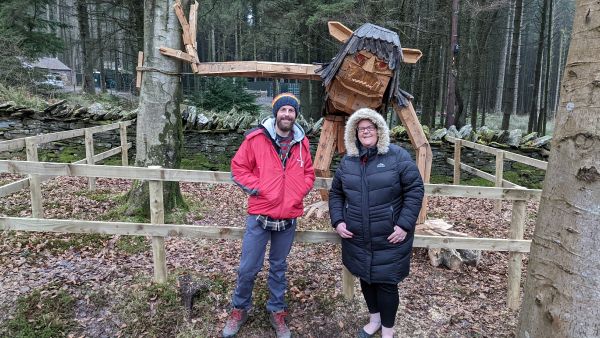 The honour of carrying out the unveiling went, appropriately, to 1st Douglas ‘Buggane’ Beaver Scouts, who are led by Clare Barber MHK, Minister for Environment, Food and Agriculture and Vice-Chair of UNESCO Biosphere Isle of Man.

John ‘Dog’ and Winnie Callister, who work tirelessly to connect people with the Isle of Man’s environment and culture, were guests at the ceremony, and Mrs Callister read the hilarious poem ‘The Big Bogane’, based on the mythical beast.

All involved then enjoyed a hot chocolate in Coffee Cottage, another great feature of the forest.

I min the time when I was a lumpah,

They war' sayin' a big fella was takin

To crossin' the road at night,

Up at the four roads yanda,

An hour before day-light.

Bolla-veen! the friken we war, "thaw,"

To pass yanda place after dark

An' the lightenin' flash seemed to split the clouds. The way the rain came down pourin'.

"An' don't forget the owl mare an' the foal,

"In the fiel' out by owl Danny Claythar's"

I was comin' home on the owl' mare's back,

Through the skutchin' rain an' the thunder clap, An' lightenin' fit to blin' us.

We had jus' got up to the Cross-four-ways

The Bogane, for sure, was crossin' the road.

Not more na two jumps ahead.

Aw! I thought I'd met me doom!

I began to weat, an' shiver an' shake.

An' sudden' me jaints seemed to thaw,

Gettin' over the hedge into Ballawhane.

An' tha's the rascal of a Bogane

Then a short cut home through Baalwhane