The Isle of Man has 26 official Dark Sky Discovery sites, where planets and stars can be enjoyed with good views and access and without light pollution. 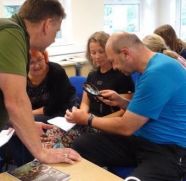 A fungus not recorded on the Isle of Man since 1976 was logged at a weekend devoted to fungi.

Expert Nev Kilkenny gave talks and led forays and identification workshops during his visit this month, organised by the Isle of Man Fungus Group.

Nev said: 'The Island has a huge variety of colourful fungi of differenmt shapes. Fungi are essential to life on earth, they recycle dead material and they assist in nutrient take-up by plants. more and more people appreciate their significance and beauty.'

Participants in the event learned to identify fungi by families using spore colour and to use synoptic keys and to recognise families that are dangerous to eat as well as symptoms of poisoning by fungal toxins.

One praised the 'wonderful weekend' while another said 'that was lots of fun learning something completely new'.

It was during their own session with Nev, that eight group members located the tiny parachute fungus Crinipellis scabella, not seen in the Island for 42 years.

The weekend was supported by the Department of Environment, Food and Agriculture, Manx Wildlife Trust and UNESCO Biosphere Isle of Man community partner the Manx Lottery Trust as part of the Wildlife Counts project.