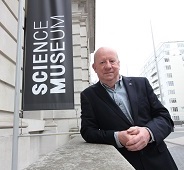 Our Biosphere was honoured to participate in a UNESCO UK-curated event at the Science Museum in London this week.

Science Museum Lates, a special evening of talks and events, explored how UNESCO’s programmes are contributing to solving global challenges.

Bill Dale BEM, founder of Beach Buddies Isle of Man, highlighted the work his citizen project does to keep the Isle of Man’s beaches free of plastic. Bill is a member of the Stakeholder Partnership Group that oversees UNESCO Biosphere Isle of Man.

He said: ‘It was a real privilege to be invited to give a presentation at the Science Museum.

‘I totally under-estimated the response and the genuine enthusiasm from the people I met.

‘There were an estimated 6,000 to 8,000 people there on the night. Obviously I didn’t speak to them all, but there was clearly a lot of interest and it was really good to see that most were students and younger people between 20 and 40 who all want to see positive change.

‘And it was very nice to hear that a lot of people described the Beach Buddies’ presentation as the most inspirational of the numerous environmental organisations involved on the night.’

UNESCO Biosphere Isle of Man is joining the first wave of an initiative from the World Network of Island and Coastal Biosphere Reserves to share initiatives as they jointly tackle plastics.

Bill has already pledged to meet UNESCO in the UK to discuss how this can be progressed globally.

He said: ‘It’s OK getting publicity and praise for what we do, but what’s more important to us than anything else is that we spread the word about our experiences in the Isle of Man and encourage people around the world not to give up, and that the answer to this is in our own hands and that we can get together and sort it out.’

How robots are used in seabed mapping, how technology is protecting communities from flooding, how the sun keeps us alive, how photogrammetry is used to preserve Katmandu’s heritage and virtual trips into space with astronaut Tim Peake were among other highlights of Science Museum Lates, which was supported by The Telegraph newspaper.