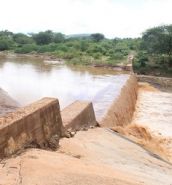 Twelve million hectares of land, an area 200 times the size of the Isle of Man is lost to desertification every year.

According to the UN Convention to Combat Desertification (UNCCD), drylands are home to two billion people and make up 44% of the world’s cultivated land and support 50% of the world’s livestock, but over a third of its species are under threat of extinction.

Whilst the Isle of Man Biosphere does not include drylands, we do depend on them and the threats aren’t confined to developing countries.

Manxman Simon Maddrell, founder of Excellent Development in the Isle of Man and UK, has been recognised for his work supporting communities in Africa and India to fight desertification.

One of eight shortlisted finalists for the 2019 UNCCD Land for Life Award, he was recognised for work over three decades as part of UNCCD’s 25th anniversary.

Excellent Development has enabled more than a million people to gain access to clean water by supporting communities to build over 1,100 sand dams, transforming their own lives by investing time saved into increased food production.

The farmers - two-thirds of whom are women - contribute to fighting the impacts of climate change and desertification by conserving soil and water in their land by digging terraces, inter-cropping and planting trees – more than 1.1 million of them so far.

They are at the forefront of sustainable agriculture methods such as grass-fed livestock, fertilising crops, nutritious grains, which we are also seeing on the Island.

Sand dams are an ancient technology that Simon has helped to revive ever since he met farmer and development worker Joshua Mukusya back in 1985, driving them to set up Excellent in the UK and Kenya in 2002.

A sand dam animation by Manxman Chris Cubbon can be seen on YouTube here.

Built across a sandy, seasonal river bed, a sand dam is a reinforced stone-masonry wall with almost no maintenance costs and lasting upwards of 100 years. During the rainy season, the sand dam fills with sediment-laden water. Heavy sand is deposited behind the dam, while the light silt is carried downstream. Within one to four seasons, the dam fills with sand storing up to 40M litres of water, which can be extracted via an infiltration system leading to a tap, water tank or shallow well with a hand pump.

The effort has been assisted by the Isle of Man Government and community.

Simon commented: 'I’m very proud to be Manx and very proud of the support the island has given to Excellent’s work. The Government has contributed nearly £1 million since 2005, thousands of individuals have donated and dozens have even contributed, hands-on, by joining expeditions to build sand dams alongside communities in Kenya, including a Barclays Bank team last year.

'Sand dams reflect the Manx values of innovation and creating freedom and, at £13 per person to deliver clean water for life, they offer the value for money we all love – especially those with farming in their blood.'