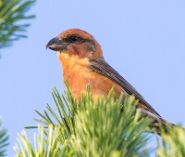 The annual Isle of Man Christmas Bird Race is an Island-wide collaborative effort to spot as many species of wild birds as possible during the week between Christmas and the year’s end.

It’s a great excuse for individuals, groups and families to head outdoors for some fresh air and exercise during the festive period.

The bird race isn’t a competition between individual birdwatchers. The aim is for everyone to work together collectively to find and record as many species as possible.

The bird race is organised by Manx BirdLife and the rules are simple:

Each year the bird race brings different surprises. In addition to our resident birds, the prevailing weather across the Island, the British Isles and especially the Arctic and European Continent, greatly influences the number and variety of species that take winter refuge here. No two winters – and no two bird races – are exactly the same.

Last year, the diminutive Little Gull, the pine-loving Common Crossbill, the aptly-named Snow Bunting and the very scarce Stock Dove, were seen for the first time during a Christmas Bird Race.

The total number of species recorded during each year’s bird race have been:

So the record stands at an impressive 113 species in just seven days. Can you help to beat that total this year? Manx BirdLife looks forward to receiving your sightings.

For more information and details of how to take part, visit www.manxbirdlife.im/sightings/christmas-bird-race