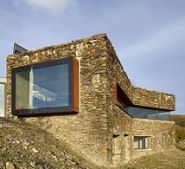 The Biosphere-inspired rural retreat that has won architecture plaudits

A rural retreat inspired by the Isle of Man’s UNESCO Biosphere status is shortlisted for a UK national architecture award.

Dr Peter Lillywhite, a retired scientist, and his wife Carole, a retired teacher, have a broad range of specialisms and interests, including insect neurology, zoology and biological science.

The architects say the project is inspired by the Lillywhites' 'deep respect' for the Island's Biosphere status.

A weather station was installed on the site a year prior to construction to gather data, driving the form of the building.

The retreat was constructed using dry stone walls made by local craftsmen. The construction style allows ecology to inhabit the voids, creating a synergy with the land.

Carbon-capturing hay base and native wildflower planting create the house’s biodiverse green roofs, further blending the dwelling with its environment.

The retreat has a host of other environmentally friendly features, including a lake-based water-source pump to provide heating and a borehole to draw water.

With the ongoing advice of Manx Wildlife Trust, the Lillywhites plan to return the seven-acre former agricultural smallholding to its original wildlife state.

They hope the land will be key site for the conservation, in support of the Isle of Man Government’s biodiversity strategy.

The couple plan to open the retreat to visitors, including schools, as a destination to observe and learn about the Isle of Man’s natural history, geology, history and culture.

This month, the development was awarded a Royal Institute of British Architects’ (RIBA) North West Regional Award and the RIBA Sustainability Award. The project is now shortlisted for a national award. It’s the first time in more than half a century that a RIBA award has gone to an Isle of Man project.