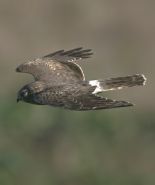 The Isle of Man has the highest density of roosting hen harriers in the British Isles. Louise Samson, Biodiversity Officer with DEFA, outlines the vital role volunteers play in monitoring these beautiful birds of prey:

Since 2013, a group of hardy volunteers have been monitoring hen harrier roosts across the Isle of Man.

The counts are co-ordinated with those undertaken in the rest of the British Isles and take place once a month from October to March.

This is not an activity for the faint hearted. Volunteers watch with binoculars, far enough away not to disturb the birds and often in freezing conditions. Counts are standardised and are two-hours long and start an hour and half before sunset.

It’s not unknown for participants to take hot water bottles and there are often tales of “I got so cold I could barely write” or “I got caught in a shower again!”

Nevertheless, we do it because there is a thrill in seeing hen harriers coming into roost. You never know how many you’ll see. More often than not, there is an hour and half of no activity followed by a short burst of intense activity when trying to watch and take notes in decreasing light becomes challenging.

The slow periods waiting can be tranquil: a time to relax, reflect and enjoy the surrounding countryside. There is always the opportunity to spot other bird life including peregrine, reed bunting, woodcock, crossbill, wrens, tits, blackbirds and the occasional owl.

The volunteer counters are contributing to a very successful monitoring programme that has consistently demonstrated that the Isle of Man has the highest density of roosting hen harriers in the British Isles.

Free from persecution, the birds are able to flourish in the Isle of Man. Every sighting provides a thrill and some of us get completely hooked by these special birds.